AWP interview on Corona: Social responsibility in the foreground

Zurich (awp) – The Swiss economy is suffering from drastic measures in times of the corona pandemic. At the same time, however, the crisis is also leading to greater cohesion and solidarity. The economy could also benefit from this in the longer term, says Daniel Künstle, managing director of the consulting firm Commslab, in an interview with AWP.

AWP: According to your analyses, the reputation of the Swiss economy has risen sharply for the first time in a long while. And this despite or precisely because of the Corona crisis?

Daniel Künstle: That is indeed the case. Despite falling stock market prices and the threat of economic challenges as a result of the corona lockdown, the reputation of the Swiss economy as a whole has improved. This is because a fundamentally different assessment perspective has taken hold since the emergence of the all-dominant reporting around the corona virus.

AWP: What exactly is meant by this?

DK: At the moment, the main question is whether companies are meeting their locational responsibility, how exactly they are putting their competencies at the service of society and what activities they are carrying out to support Switzerland as a business location. So at the moment, the main issue is what social benefits that large companies in particular are generating for Switzerland in this crisis. So far, this assessment has been more positive than negative. 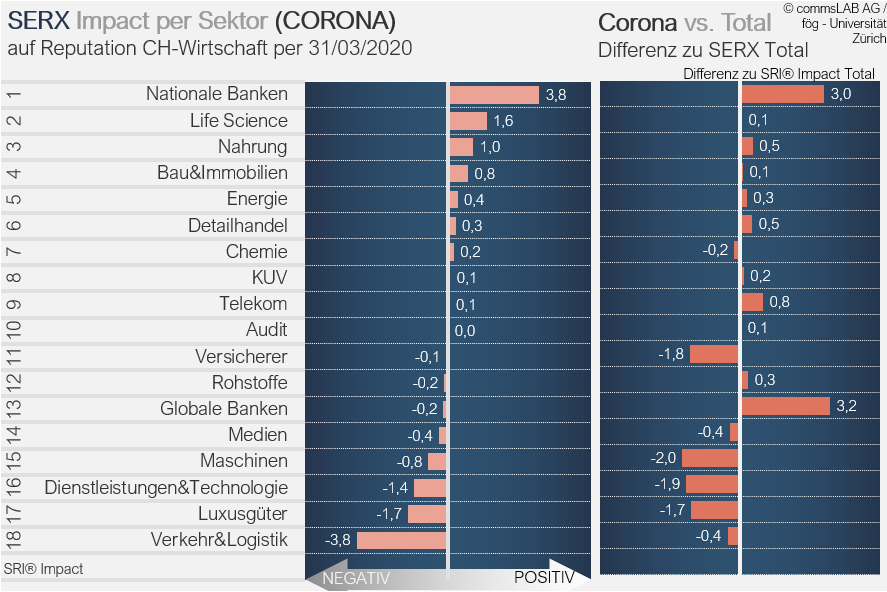 The chart shows the impact of the Corona crisis reporting on the reputation of the individual Swiss economic sector (left chart) and compares this value with the corresponding value of the overall reputation of the sector (right chart). Reading aid: The ‘Domestic Banks’ sector achieves the highest reputation impact in the context of reporting on the corona crisis (+3.8 – left chart). Compared with the overall impact (see previous page), it is significantly better (+3.0 – right chart), i.e. the sector has benefited from the Corona crisis in terms of reputation so far.

AWP: You mentioned the fundamental change in perspective. A rather short-term thing, or could the Corona crisis change our opinion of the Swiss economy in the longer term?

DK: Fundamental crises always change a society or leave behind a ‘degradation product’ in the form of altered social expectation structures – and the corona pandemic is such a fundamental crisis. Accordingly, it can already be assumed that the expectation of locationally responsible action is a legacy that will not disappear so quickly.

AWP: What are the similarities or differences to the financial crisis?

DK: Already after the financial crisis of 2008, the commitment and benefit for one’s own business location was a central reputation driver. At that time, it helped above all those companies that – unlike the global financial players who are guilty in public opinion – were characterized by rather long-term business models and thus strengthened Switzerland as a business location during the crisis. This narrative therefore tends to gain in importance, especially in crisis situations.

AWP: In the last major economic crisis, the banks in particular were publicly pilloried. Now the banks seem to be seen as problem solvers.

DK: In contrast to the financial crisis of 2008, this time it is not economic upheavals – such as the bursting of the real estate bubble in the US – that are at the origin of the crisis. It is a global health crisis manifesting itself due to the coronavirus, and only afterwards the resulting fear of the economic consequences.

AWP: In other words: this time it is a problem for society as a whole.

DK: Exactly. From a public perspective, the blame for the current crisis cannot be attributed to individual economic sectors or even companies, but is understood as a problem for society as a whole. Because of their central role in handling the billion-dollar Corona emergency loans, banks can now prove to everyone that they too – in the interests of the big picture – are serving the suffering business location.

AWP: Do you believe that this will have a lasting positive impact on the reputation of the banks?

DK: For many domestic banks, their reputation has been intact again for years, after their reputation had suffered primarily from the US tax dispute. This positive development is due not least to the fact that these banks have obviously proven to be responsible for their regional and local business locations.

AWP: An effect from which the big global banks also benefit?

DK: The evidence is much less obvious for the big banks because of their global orientation, which is why their overall still negative reputation is improving only slowly. However, a professional handling of emergency loans for the benefit of Switzerland as a business location is certainly a step in the right direction.

AWP: Under pressure from the FINMA, UBS and Credit Suisse have now divided their dividend payments. A clever move or pure reputation cosmetics?

DK: Due to the continued low share prices of the two big banks since the financial crisis and the further decline in recent years, the distribution of dividends is of particular importance from the investors’ point of view. However, in order not to jeopardize the positive image as an important helper in the Corona crisis, the step that has now been taken is certainly a good compromise to keep all stakeholders in good spirits.

AWP: The media often discuss the extent to which the current crisis has made us aware of a possibly necessary change in the economy. Where do you see the lessons that could be learned from this crisis?

DK: On the positive side, it is certainly true that measures can be implemented very quickly and in a way that would never work in normal times, for the benefit and protection of the social environment. This also applies to the way in which companies that would otherwise act as competitors are now suddenly pulling together, be it in joint research programs of pharmaceutical companies to develop a vaccine, or in the joint handling of the corona emergency loans by the banks.

AWP: Voices are becoming louder that accuse the media of too much faith in the state and public relations. How do you see the role of the media in the crisis?

DK: Societal crises are per se characterized by a move closer and increased loyalty. The information function of the media is becoming more important than the control function. For a brief moment, political conflict is also suspended, the political parties have been in agreement as never before over the last few weeks. Whether or not the media are doing a good job in this situation will only be judged sensibly with some distance from the crisis.

The consulting agency commsLAB calculates the Swiss Economy Reputation Index (SERX) in collaboration with the University of Zurich. This indicator reflects confidence in the Swiss economy in the form of the reputation conveyed by the media. The index comprises more than 150 companies in the private sector as well as state-owned companies.